Thirteen years ago, I was fortunate enough to visit Naples for the first time. Having never been to Italy, or out of the country for that matter, I didn’t know what to expect. I certainly did not expect to get bowled over by the incredibly frenetic energy that flows from that great city. I was completely overwhelmed by the passion of the people, the masses of motorbikes corkscrewing their way through oncoming traffic (and ‘optional’ stops signs) and the overall electricity that makes up Naples. All I could do was blink… It was when I was training with Master Pizzaiolo Enzo Coccia that I met Irene (Eye–ree–nay),my translator. She saw that I was beside myself and was so sweet and endearing. She really helped me relax a bit and settle into my surroundings so I could enjoy the city and take it all in. Somewhere throughout the day, we had a longer conversation about eggplant, of all things, and our mutual love and respect for its deliciousness, the various ways and techniques to prepare it and our favorite dishes. To this day, I’ll never forget that chat and how we bonded over eggplant.

Flash forward ten years and I was back in Naples on another trip studying with the Associazione Verace Pizza Napoletana that teaches and promotes Neapolitan pizza and culture. At the time, I was taking classes and working with them to better my skills and techniques as a pizzaiolo. Generally, in the morning, I would work in a pizzeria and then head to class with a few hours to spare in between. On the first day, I was quite hungry before class and found a salumeria that also served sandwiches. Little did I know that I would be coming back for the next ten days to order the same delight. It was a very simple sandwich that was made up of this fabulously crunchy bread with marinated eggplant, mozzarella di bufala, capocollo, balsamic vinegar and that is it. Simple. It’s a flavor combination that I have enjoyed for years and now bring to you with our next pizza special – Pizza di Irene – in honor of my eggplant-loving friend. This pizza starts with an extra virgin olive oil base and then is topped with generous amounts of mozzarella di bufala, marinated eggplant and capocollo. I’ve also added a bit of ricotta to the mix and dusting of Pecorino Romano before we blaze it in our wood-fired volcanoes. After the steamy hot deliciousness rolls out of the oven, it is finished with a balsamic reduction to give it a touch of sweetness and acid to cut through all the other rich ingredients. My eyes roll in the back of my head every time I think about it!

While Irene and I never did get to enjoy this eggplant combination together (or even meet again), I sure she would have loved it. I am sure you will, too! Come join us for the Pizza di Irene from October 30 – November 26th before it vanishes until next year! 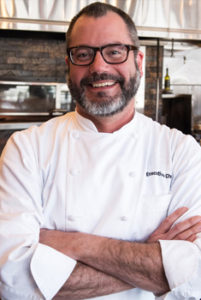